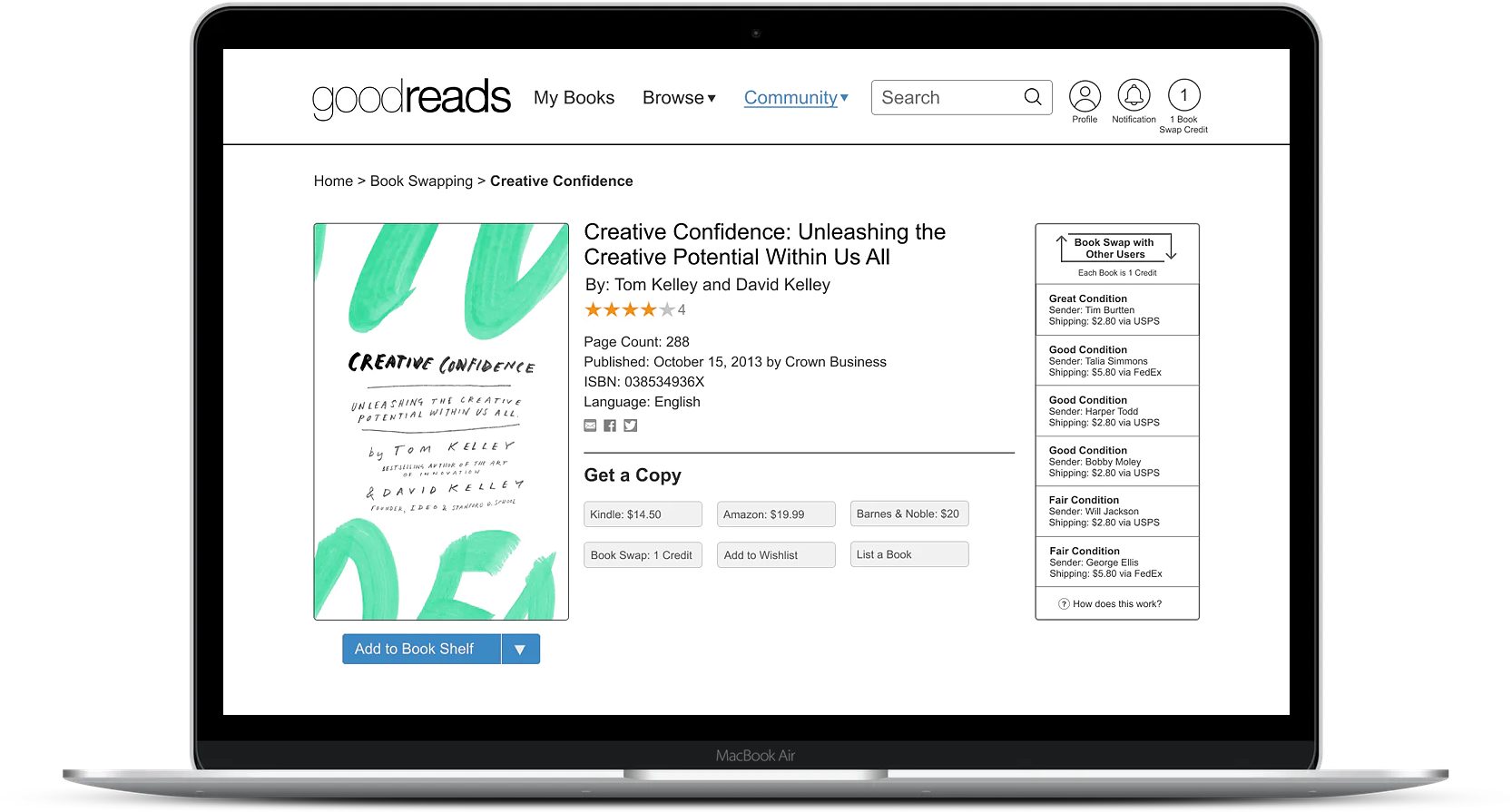 As an avid Goodreads’ user, I had a hypothesis that they were overlooking an opportunity to serve both user and business needs through a book swapping service. They have a strong user base who engage in creating book lists, building personal bookshelves, and writing reviews, but through a book swapping feature, they could further strengthen ties between users and offer an environmental friendly initiative which would extend a books usage. My hypothesis was that this would also solve the user need of how to discard unwanted books - this was rebutted during my research, but more on that later!

Research revealed that the user need I hypothesized this feature would solve was not valid: I thought this initiative would provide users an easy way to discard of unwanted books, but during user interviews, I learned that users already had practices in place to solve this need. On the other hand, my research revealed that users preferred reading print books and would be interested in an inexpensive way to attain books, so I pivoted to focus on this user need.

Below is the process which led me to uncovering the real user need:

I first conducted market research to learn about overall book purchasing and reading trends. I then conducted competitive analysis to understand how other companies facilitated book swapping. Next, I hosted remote user interviews with 3 participants, who considered themselves avid book readers and were familiar with Goodreads, and asked them a series of open-ended questions which tied back to my research goals. Later on, I conducted usability tests on my Mid-Fi and Hi-Fi wireframes to uncover blind spots and unexpected pain points in my designs.

Key Takeaways from My Research

My next step was to find a way to make this process as easy and inexpensive for users as possible. I conducted additional competitive analysis to learn how competitors facilitated shipping services, which was a good starting point, but my aha moment was when I remembered that when I sold books after college, I mailed them as 'media mail' which cost a flat rate of $2.80 for books under a certain weight via USPS, which was much less expensive than other shipping rates. After researching USPS’ website, I discovered that they allowed users to print mailing labels from home and they offered a free pick up service where users could schedule package pick ups from their homes! I researched USPS’ competitors, FedEx and UPS, and found that both do offer a similar service, but for a fee.

This was a major breakthrough:
I had found a way for users to mail books at a very low cost and avoid a trip to the post office!

Based on this research, I concluded that the system which would be most in line with users needs and expectations would be a credit system where each book is 1 credit and users gain a credit when they send a book to another user which they can then in turn use to request another book. This system would effectively solve the defined user need and users would be able to create and print shipping labels and schedule package pick ups from their homes, all for $2.80. 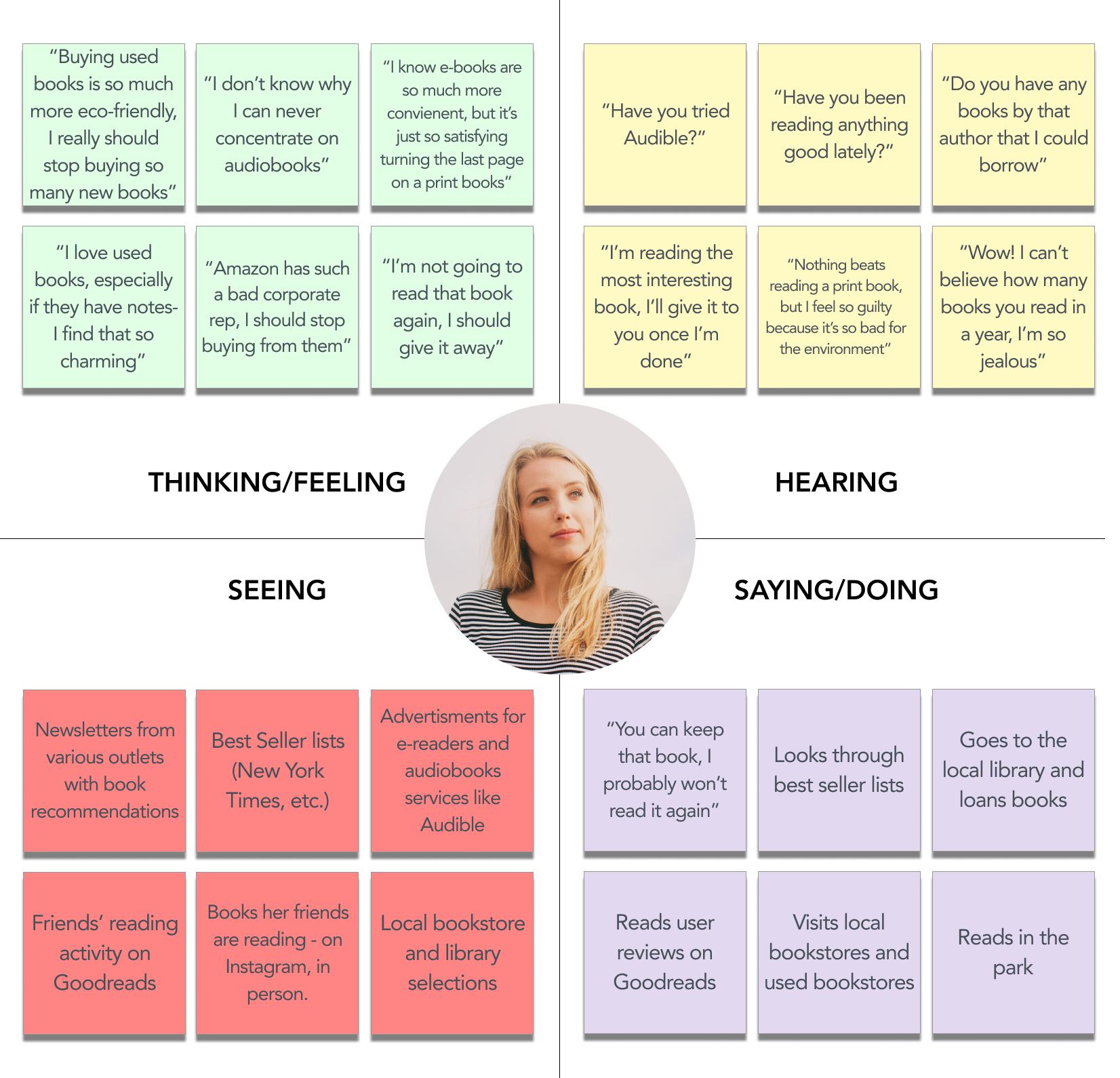 I then built an Empathy Map, based on my research, which further helped me understand my users, and helped me maintain a user-driven mindset. 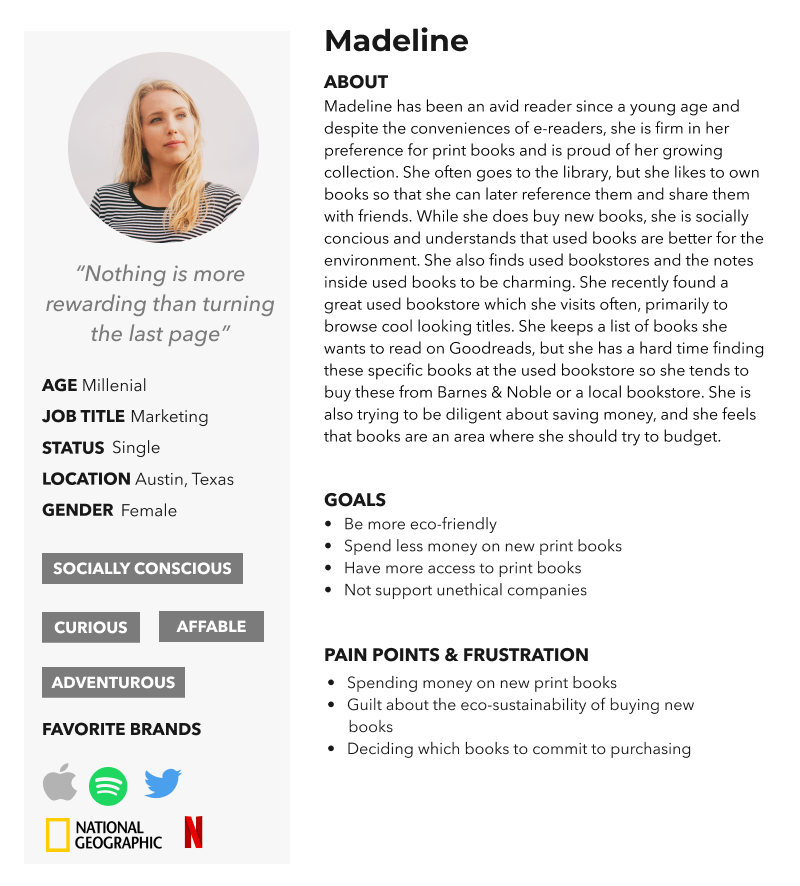 Based on my research findings and Empathy Map, I built my Persona, Madeline. I kept her goals and pain points in mind as I made design decisions which further helped ensure a user-driven approach and that I did not fall into the trap of designing for myself.

Since I was adding a feature to an already existing website, not much was needed around the IA. However, I did conduct a simple card sort, via Optimal Sort, to determine the best terminology to refer to users interacting with the book swap tool.

Based on the card sort, the terminology that was most clear to users was receiver (the user receiving the book) and sender (the user sending the book). Turns out some things really are just that simple sometimes!

Thinking Through the Flows

While having established the credit system was a major breakthrough, there were still functionalities that I had to think through: how exactly the credit system would work and how users could interact with the book swapping tool.
‍
I created a few Task Flows to help me think through these functionalities and I later revised them after my usability testing because testing revealed that certain components didn’t fit in within the larger context as expected.
‍
Here is the primary Task Flow which solves the users need, the task is for the user to find a book and send a book swap request. This is the final version which had been validated during my usability tests.

I developed iterations of wireframes using pen and paper and then developed the pages most in line with solving the defined problem in Mid-Fidelity in Figma.
‍
I based the main ‘Creative Confidence’ book page on Goodreads’ current design, but I wanted to update the page with modern elements from Audible's UI (I had chosen Audible as it's Goodreads' sister company, and under the Amazon umbrella as well). I also wanted to highlight the book swapping feature in a way that would feel natural to returning users.

Below are early Lo-Fi and Mid-Fi drafts of the main Book Swapping page which highlight the benefits of book swapping, showcase available books, and outline the process. These were later iterated upon, but they served as my starting point. 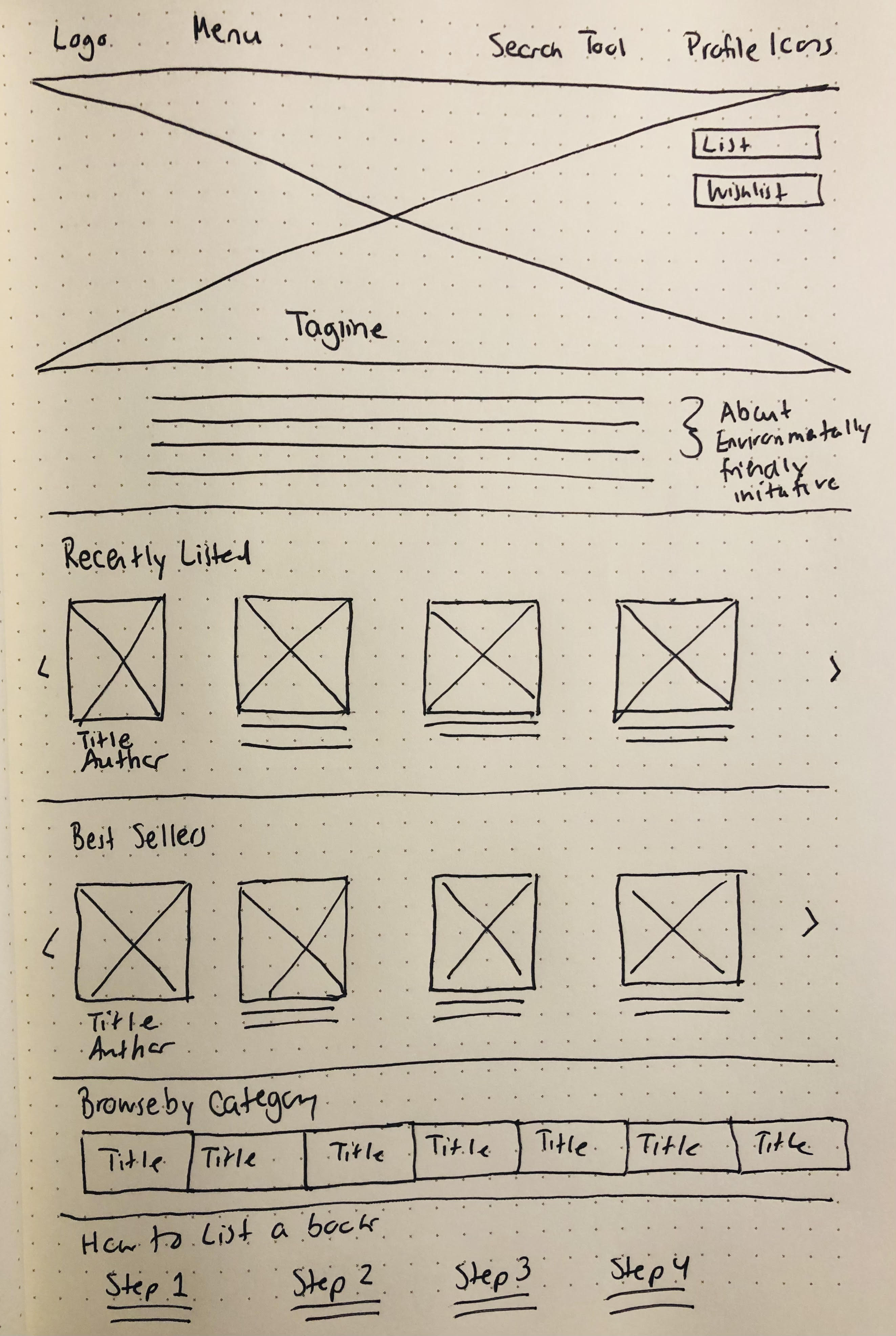 Once I designed my Mid-Fi wireframes, I created a prototype in Figma and due to time constraints, I only had the opportunity to conduct testing with 2 participants within my targeted demographic. If I had more time, I would have tested the flow with additional users.

Participants said that the task was intuitive, but there were a few suggestions and takeaways:

As I was working with an existing brand, there was not much flexibility around the visual design (although I would have loved to update Goodreads' branding). I did, however, update certain elements with Audible's UI, Goodreads' sister brand, to give it a modern update.
‍
I used Goodreads' logo but the font, Arial, and the colors were inspired by Audible:

Hi-Fi Designs: The Evolution of the Book Swapping Tool

In early iterations, I had placed a Recycling icon next to the ‘Book Swap’ title to highlight the environmental benefits of the feature, but users noted confusion about the meaning of the icon. I modified the design and placed arrows around the 'Book Swap with Other Users' title to represent a swapping motion.
‍
Below that, I reiterated that each book is only 1 credit based on feedback from users who said they liked to have the same information accessible in different places. I initially hadn’t included this information because I felt it would be redundant.
‍
Then listed are the various books available for book swapping. I bolded the condition of the book because participants noted that this was most important to them and I wanted to establish hierarchy to highlight that information. In the same vein, I organized the book listings from 'Great' to 'Fair' condition.
‍
On the bottom, I placed a 'Help' section for those not be familiar with the book swapping tool. I had initially placed this at the top because I wanted it to be accessible, but users suggested moving it to its current placement and raised the point that the entire tool will always be visible and so that section would always be accessible, even at the bottom.

Once a book had been selected

Once a book has been requested

Below is what the final Book Swapping tool looks like in action, in the context of the book's main page:

Besides finessing with the Book Swapping tool, I focused on finalizing the look of the Pop Out screens which would appear when users select the 'Book Swap' CTA under 'Get a Copy' on the main book page. The hierarchy of information mirrors the Book Swapping tool, and on the Confirmation Pop Up, I reiterated the details of the book swap tool per the user feedback I received earlier that users appreciate to see the same information in various contexts.

I touched upon it above, but below are the full findings from my Hi-Fi usability test. I had recruited 4 participants within my targeted demographic to test my Hi-Fi designs. The results were far more interesting than my earlier usability test!

I built out an Affinity Map after my testing to help me uncover patterns between the feedback I had received and to help me visualize the Priority Revisions needed. 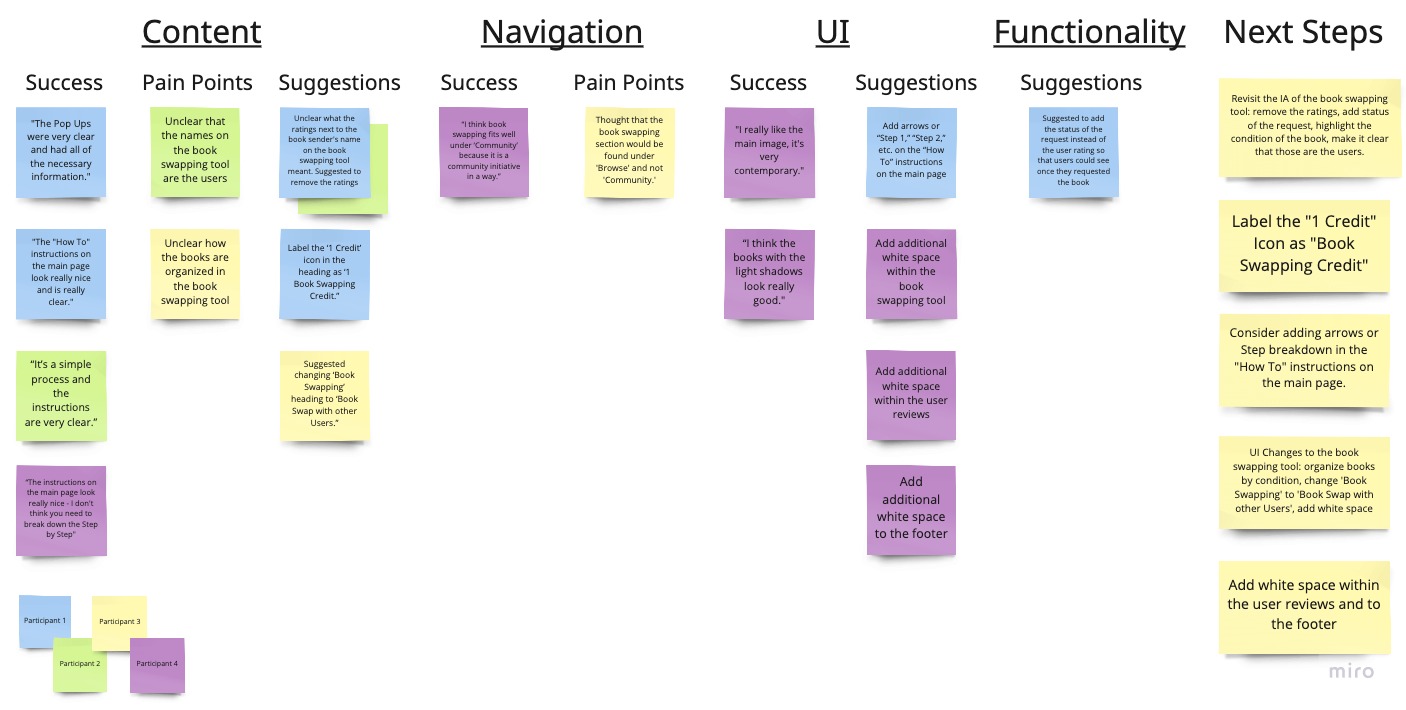 After analyzing the feedback I received from the participants, I made the below key revisions to my designs:

I mentioned above that the Book Swapping tool went through many versions, but I wanted to highlight the changes here because the majority of the changes came from my Hi-Fi usability tests. Under normal circumstances, I would have been eager to test this Book Swapping tool again with users, but due to the nature of this project, I was unable to do so.

Since I had certain constraints around the structure and UI, the research surprised me as being the most interesting element of this project. It was frustrating to have my initial hypothesis about user needs rebutted, but it was also extremely rewarding once I found a system which would support the new user need I discovered during my user interviews. The usability testing that I conducted on my Hi-Fi wireframes also revealed interesting results and I think the designs improved infinitely.
‍
This project highlighted the importance of research and testing at every possible opportunity, it’s a lesson which will stay with me during future projects.